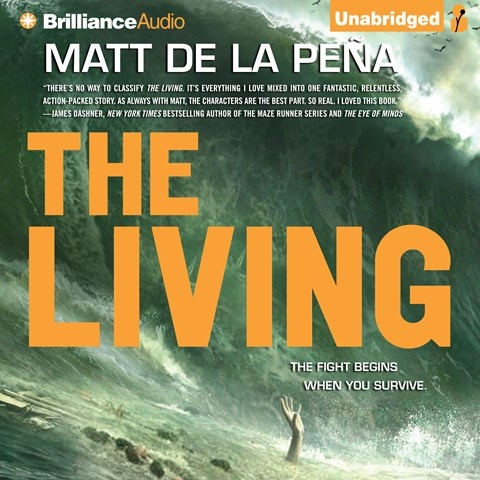 De la Peña’s apocalyptic adventure story, which starts off on a cruise ship and ends with a tsunami on a disease-ravaged island, will have listeners hanging on for dear life. As Shy, a Mexican-American crew member, reels from one disaster to the next, narrator Henry Leyva excels at dialogue. He brings to life the voices of the crew and passengers aboard the luxury liner, highlighting for listeners de la Peña’s provocative exploration of class tensions and making them care when lives are lost. Everyone from Shy’s Mexican grandmother to a spoiled rich kid to Shy’s fellow crew members gets his or her own distinct treatment, adding dimension to this fast-paced story. Listeners will find Leyva's plain-spoken, likable Shy especially engaging. J.C.G. SYNC 2015 © AudioFile 2013, Portland, Maine [Published: DECEMBER 2013]