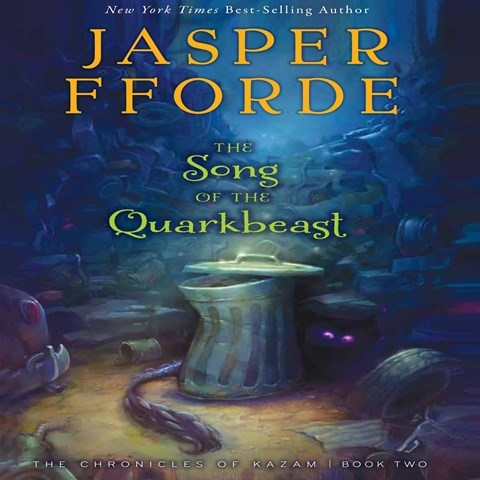 THE SONG OF THE QUARKBEAST Chronicles of Kazam, Book 2

While Jennifer Strange has the lowly status of a foundling in the Ununited Kingdoms, in the Great Zambini's absence she runs the powerful magic company Kazam. Narrator Elizabeth Jasicki imbues Jennifer's character with the strength and briskness appropriate for a 16-year-old who is entrusted with the financial security of Kazam and the welfare of the world's most powerful wizards. With an accent and surety reminiscent of Emma Watson's Hermione Granger, Jasicki rallies the team of eccentrics against rival company iMagic. She creates charming and earnest voices for Kazam's young assistant and wizard-in-training, as well as an array of fittingly peculiar voices for its wizards. The king and the plotting staff of iMagic are presented with a heavy dose of sanctimony and bravado. The quarkbeast utters only "quark" but endears himself nonetheless. L.T. © AudioFile 2014, Portland, Maine [Published: OCTOBER 2014]