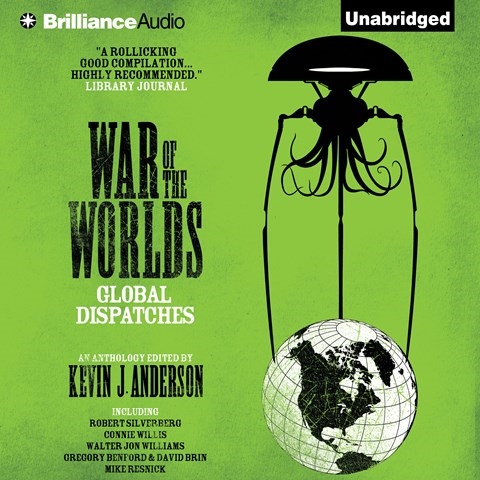 WAR OF THE WORLDS Global Dispatches

Narrator MacLeod Andrews turns in a virtuoso performance of a work that would be a challenge for any narrator. In this compilation, today's top science-fiction authors create missives by 20 famous people who recount their experiences during a Martian invasion. Each of these vignettes features a handful of characters, an approach that results in dozens of different voices, along with a plethora of accents. Andrews animates the personalities with panache, bringing forth the wry humor of Mark Twain, the persnicketiness of an Emily Dickinson scholar, and the horror of a dogfight by Jack London. Every 20 minutes to an hour, Andrews must inhabit a new set of characters, and he rises to the occasion. The Martian invasion may have been terrible, but Andrews's presentation is delightful. D.E.M. Winner of AudioFile Earphones Award © AudioFile 2013, Portland, Maine [Published: DECEMBER 2013]