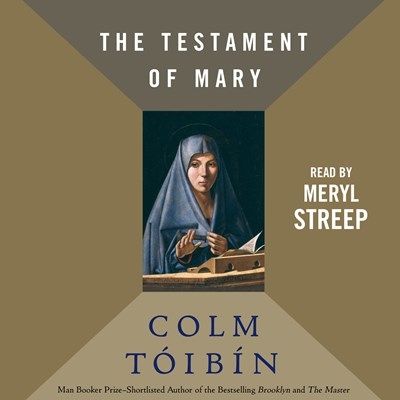 THE TESTAMENT OF MARY

Between them, author Colm Tóibín and narrator Meryl Streep have created an audio experience worthy of all the popular awards put together. Winner of the 2012 Man Booker Prize, THE TESTAMENT OF MARY delivers what the title suggests—the life and death of Jesus of Nazareth as remembered by his mother. Told in the first person, this testament is a fearsome thing, not always what his followers, faithfully writing down her words, want to hear. But tell it she does—she, Mary/Meryl. What a role. Gorgeously, fluidly, evocatively written. Scenes of celebration, miracle, terror, pain, and redemption are vividly conjured as Streep transmutes herself into the famous first-century mother whose son left long before his death. A.C.S. Winner of AudioFile Earphones Award, 2014 Audies Finalist © AudioFile 2013, Portland, Maine [Published: OCTOBER 2013]