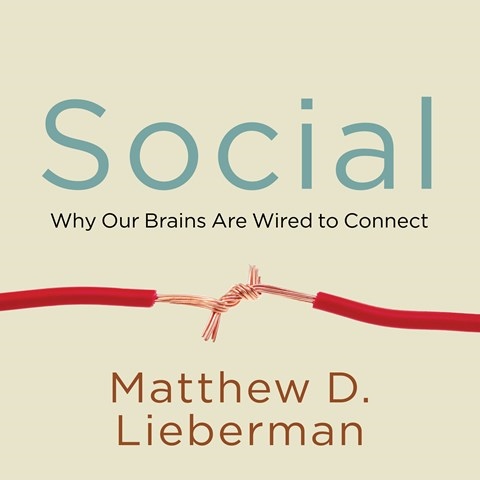 SOCIAL Why Our Brains Are Wired to Connect

Listening to this audiobook is a little like driving in the dark. Some moments are exhilarating, but a lot of the time you're wondering where you are. Mike Chamberlain's tenor delivery gives the material a "gee-whiz" excitement, but after 11 hours of brain anatomy and clinical studies, even Chamberlain's extensive bag of narrator tricks seems exhausted. That's not to say there aren't a lot of big ideas in this work. Lieberman's thesis that our brains evolved to fulfill social interaction is well documented, often by his own studies. The audiobook also provides plenty of stuff to talk about around the watercooler--things like mirror neurons, mentalizing, verbal grooming, and faux selfishness. But, ultimately, Lieberman's impressive discussion may be better read in print, a medium that allows one to easily revisit its concepts, charts, and imagery. R.W.S. © AudioFile 2014, Portland, Maine [Published: JANUARY 2014]