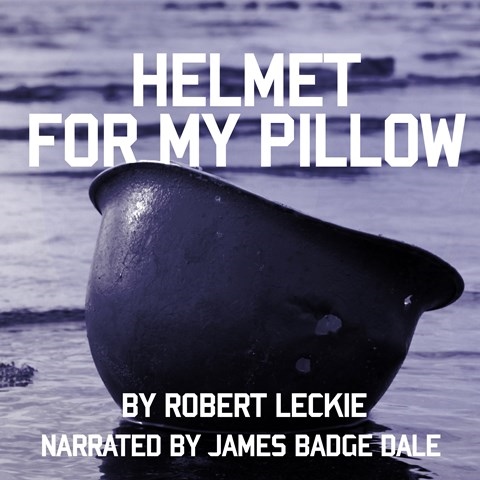 HELMET FOR MY PILLOW From Parris Island to the Pacific: A Young Marine's Stirring Account of Combat in World War II

Robert Leckie’s unvarnished 1957 memoir paints a vivid picture of his experiences as a Marine on the frontlines of the Pacific Theater in WWII. Using the unadorned demeanor of a tough Marine, narrator James Badge Dale delivers Leckie’s eloquent text with intensity and respect. He adopts a touch of humor when describing the occasional raucous camaraderie of the men but mostly employs a hard-boiled, sturdy veneer for Leckie’s revealing and sometimes shocking narrative. Dale’s unrelenting pronunciation of long “a”s (such as “a gun”) is at first distracting but eventually comes to feel like the unyielding backbone of a young warrior facing the brutal action of battle. A brief introduction from Tom Hanks helps the listener anticipate the significance of this powerful American chronicle. N.M.C. © AudioFile 2013, Portland, Maine [Published: NOVEMBER 2013]