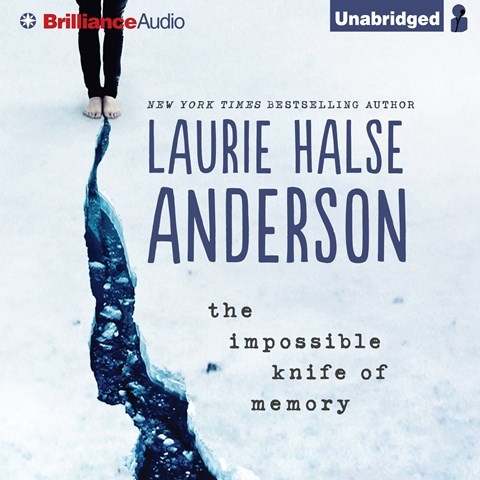 THE IMPOSSIBLE KNIFE OF MEMORY

Known for writing about difficult issues that affect contemporary teens, Anderson focuses her latest novel on 17-year-old Hayley and her father, Andy, who suffers from PTSD after serving in Iraq and Afghanistan. Julia Whelan's expert performance brings out the complexity of Hayley's character, picking up on her vulnerability and defensive toughness, mixing both with a good dose of teen attitude. Whelan's solid characterizations, varied cadence, and expressive reading strengthen the listener’s connection to this emotionally intense story. Narrator Luke Daniels delivers the few sections told from Andy's point of view. His mature voice makes a believable contrast with Whelan's, and he captures Andy's tortured flashbacks and overwhelming feelings of survivor guilt. An unforgettable audiobook for older teens and adults. C.B.L. Winner of AudioFile Earphones Award, 2015 Audies Finalist © AudioFile 2014, Portland, Maine [Published: JANUARY 2014]