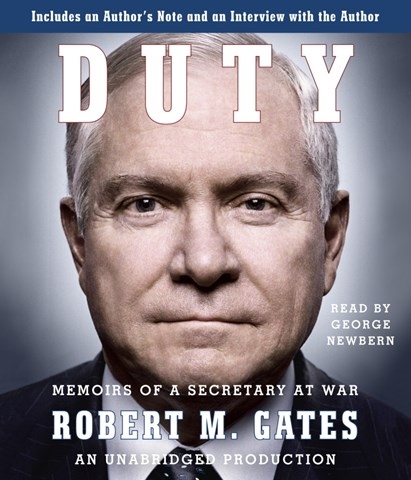 DUTY Memoirs of a Secretary at War

Listening to this remarkable work is akin to eavesdropping on conversations in the Oval Office and policy discussions at the Pentagon. The author served as secretary of defense for both Presidents G.W. Bush and Obama, and this audiobook is a candid account of his tenure while the nation was involved in two wars. Gates himself delivers the author’s note at the beginning, narrating in a deep, gravelly voice that exudes confidence. George Newbern delivers the rest of the work. He doesn’t have a broad range, and, because he settles into a pattern as this long book unfolds, he’s prone to some monotony and flatness in his performance. However, he clearly articulates Gates’s arguments so they remain coherent and logical. R.I.G. © AudioFile 2014, Portland, Maine [Published: FEBRUARY 2014]