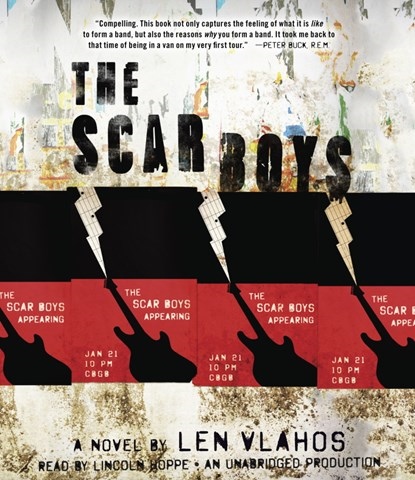 Harry is ugly, shy, and covered with hideous burn scars. Befriended by the charismatic Johnny, he finds his way back to life through participation in a band. Narrating this story about the power of music and friendship to heal, Lincoln Hoppe strikes just the right note with the character of Harry—offbeat, a touch sarcastic, a little wistful—as Harry describes the teen friendships and tensions that arise around the band, The Scar Boys. Hoppe’s perfect pacing moves the story along while allowing Vlahos’s details to unfold in the listener’s mind. Saturated with musical references, this audiobook has chapter titles that are song titles. The author even plays the guitar music that introduces the production and provides the accompaniment when Hoppe sings one of Vlahos’s original songs. J.C.G. © AudioFile 2014, Portland, Maine [Published: JANUARY 2014]