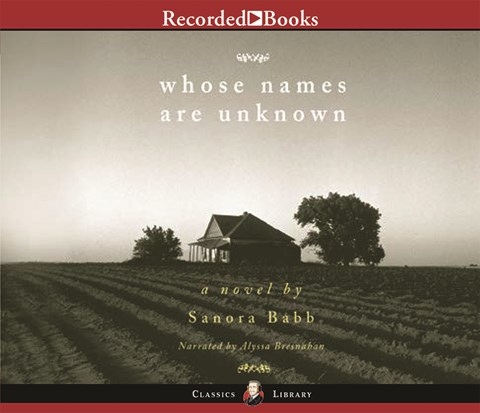 WHOSE NAMES ARE UNKNOWN

Alyssa Bresnahan grabs attention and never releases it throughout Sanora Babb’s deeply felt and deeply human novel dealing with the daily lives of Oklahoma wheat farmers and their families in the 1930s. They must cope with dust storms and the poverty caused by them, as well as the hardscrabble existence of life in the California migrant camps. Filmmaker Ken Burns featured this novel in his PBS special “Dust Bowl,” and Bresnahan brings so much truth to each character that it sounds as if we’re listening to a documentary in which real people are telling their stories. Bresnahan elicits every nuance from Babb’s seemingly simple dialogue while at the same time finding the precise voice and tempo for each of the many remarkable characters. Babb’s first-class novel is given a first-class performance. S.J.H. Winner of AudioFile Earphones Award © AudioFile 2015, Portland, Maine [Published: APRIL 2015]