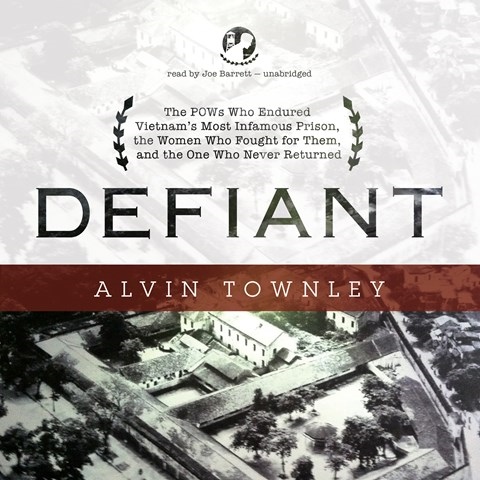 DEFIANT The POWs Who Endured Vietnam's Most Infamous Prison, the Women Who Fought for Them, and the One Who Never Returned

If the suffering of American POWs at the hands of their Vietnamese captors was unimaginable, this audiobook goes some way to make that experience vivid for listeners. Joe Barrett’s narration is matter-of-fact and mostly unadorned, save for some subtle Asian accents. But the anguish of the POWs comes through in his voice, and many of the descriptions of torture are hard to listen to. This book is much more than a chronicle of misery, however. Author Townley weaves a remarkably detailed account of “the Alcatraz 11,” the most famous inmates who endured as many as eight years in the prison nicknamed Hanoi Hilton, and the role played by the women who wouldn’t let their country forget them. D.B. © AudioFile 2014, Portland, Maine [Published: APRIL 2014]