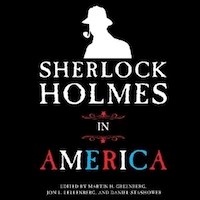 As you might expect, this Sherlock Holmes anthology finds the detective in the U.S., specifically, New York City. Often, though, it takes him farther—out west to Utah, San Diego, and San Antonio. Graeme Malcolm tells the stories from a variety of points of view. Sometimes, he narrates in Watson's voice, but he's also believable in the points of view of Harry Houdini, brother Mycroft, and Holmes himself. His accent is British, of course, but that doesn't hamper his Western voices. What listeners get—even more than the puzzles—is a sense of place and historic people as the stories put Holmes in fresh situations. This audio will appeal to historical fiction and Western buffs as much as it does to fans of the two current Holmes TV series. J.A.S. 2014 Audies Finalist © AudioFile 2014, Portland, Maine [Published: MARCH 2014]