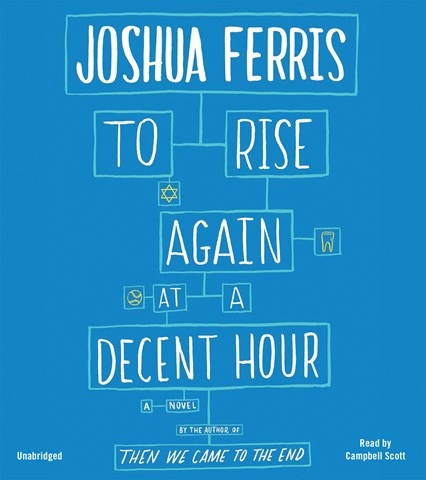 TO RISE AGAIN AT A DECENT HOUR

Narrator Campbell Scott's understated performance is a perfect match for the protagonist of this introspective novel. Manhattan dentist Paul O'Rourke is a bit of a misfit; his atheism and avoidance of social media are the least of his quirks. When his online identity is taken over by a fringe religious sect, he’s forced to confront some of his deepest convictions. Scott's subtle inflections reflect O'Rourke's narrow emotional range, bringing listeners along as the dentist's initial discomfort at his stolen identity slowly morphs into curiosity about why he’s become a target. While Scott's admirable narration can’t bring unity to the book’s disjointed conclusion, listeners will appreciate Scott's skill at transitioning between conversation, thoughts, and religious texts. C.B.L. © AudioFile 2014, Portland, Maine [Published: MAY 2014]