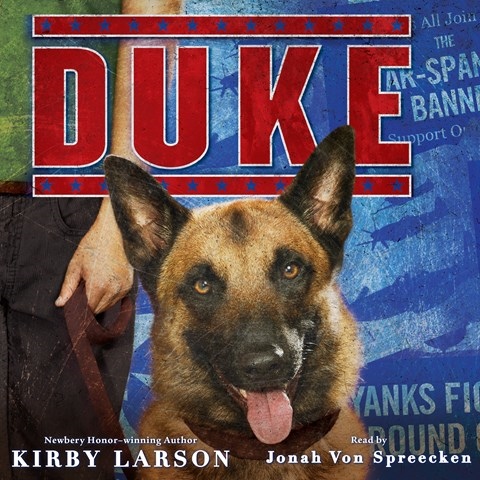 WWII rages, and Uncle Sam asks, “Are you doing all you can?" Fifth- grader Hobie Hanson desperately wants to help bring his father home from the war, but is he willing to enlist his German shepherd, Duke, in the Dogs for Defense program? As Hobie, narrator Jonah Von Spreecken has an earnestness in his voice that fits this singular period in history when so many Americans were compelled to answer the call of duty to their country. He creates distinct voices for each of the story's many characters, and even does a passing job as Hobie's little sister. Von Spreecken is faithful to the period dialogue, easily transporting the listener to a simpler time in this novel of courage, sacrifice, and a beloved dog. Semper fi. L.T. © AudioFile 2014, Portland, Maine [Published: JUNE 2014]