Home»Reviews»THE HERO'S GUIDE TO BEING AN OUTLAW 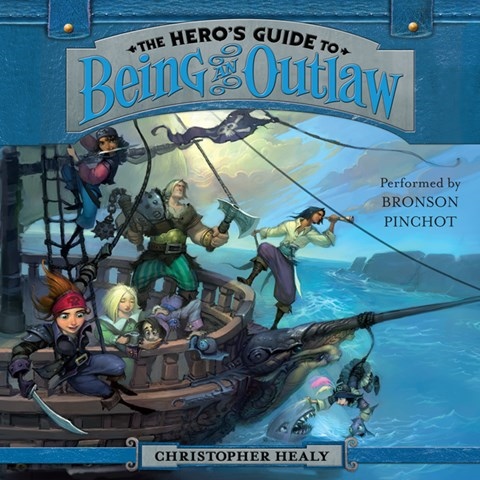 THE HERO'S GUIDE TO BEING AN OUTLAW The Hero's Guide Series, Book 3

Narrator Bronson Pinchot expertly gives voice and personality to almost a dozen familiar characters from fairy tales. In this story princes and princesses are on the run for the alleged murder of Snow White's sister, Briar Rose. It's the latest in a series of books set in this weird fairy-tale world. Pinchot opts to give some of the characters bizarre affectations, like California surfer accents. He's particularly good at making ogres sound like monsters and making the book an enjoyable romp. The Princes Charming, all four of them, are trying to save themselves and their famous wives, including Snow White, Cinderella and Sleeping Beauty, from evil forces who want to rule the 13 kingdoms, where all had previously lived happily ever after. The book is silly and quirky but full of adventure and derring-do. M.S. 2015 Audies Winner © AudioFile 2015, Portland, Maine [Published: APRIL 2015]