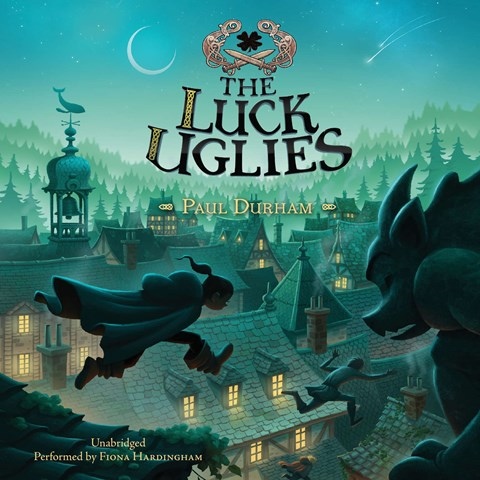 Fiona Hardingham’s energetic narration is the perfect partner for Durham’s outstanding fantasy debut. Recent strange happenings in the village of Drowning, coupled with Rye O’Chanter’s encounter with the supposedly extinct Bognoblin, have the villagers anxious for the return of the Luck Uglies. This secret society of men was exiled by Earl Longchance, who considers them wanted criminals and monsters. As Rye and her friends, Folly and Quinn, begin to unravel the labyrinth of secrets, legends, and lies that surround the village, they receive help from a mysterious family friend named Harmless, whose Irish brogue sparkles with mischief. Hardingham’s portrayals of the pompous Constable Boyle; the no-nonsense Mrs. O’Chanter; and the pouting Lottie O’Chanter help to raise this performance far above the norm. M.F.T. © AudioFile 2014, Portland, Maine [Published: AUGUST 2014]