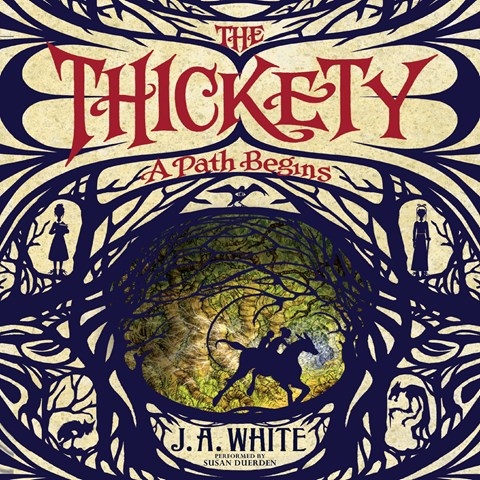 THE THICKETY: A PATH BEGINS

by J. A. White | Read by Susan Duerden

Susan Duerden narrates White’s series opener. Listeners immediately feel the story’s ominous mood as Kara Westfall witnesses her mother’s hanging for witchcraft. Afterwards, everyone in the small island community of De’Noran fearfully shuns Kara and her family. While Duerden’s authoritative tone skillfully displays the village hierarchy, it also makes Kara’s dialogue seem shrill and overdramatized. Further, the audio format highlights the parts of the story that strain credibility. When Kara discovers that she, too, has magical abilities, the evil in the Thickety tempts her down a dark path. The magical battles between Kara and another witch will keep listeners engaged. C.A. © AudioFile 2014, Portland, Maine [Published: JUNE 2014]