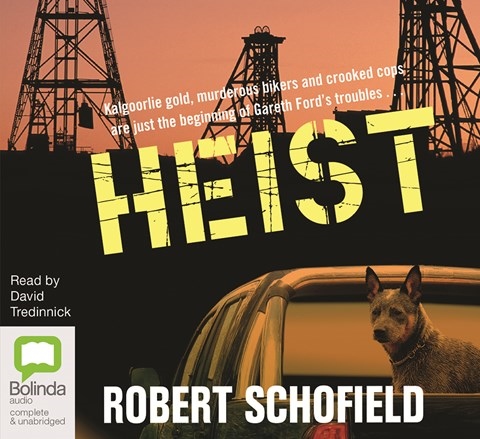 David Tredinnick, an Australian actor and narrator of more than 50 audiobooks, delivers the goods with this thriller set in arid western Australia. He copes well with a variety of difficult characters, such as an aging motorcycle gang leader, a scheming industrialist, and the protagonist, a mining engineer named Gareth Ford. Tredinnick's inflections are impeccable, sometimes a deep, gravelly bass, sometimes--well, anything the characters might sound like. A gold robbery in a processing facility leads to murder, and Ford is under suspicion. (He gets beat up a lot and seems accident prone.) There's a deadly desert trip from Kalgoorlie to Perth, motorcycle gang politics, and more. The book is the first of a trilogy, with the second installment just out. D.R.W. © AudioFile 2014, Portland, Maine [Published: AUGUST 2014]