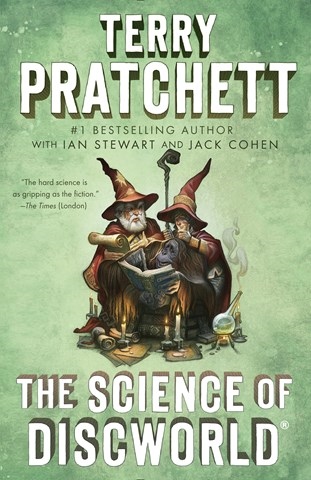 THE SCIENCE OF DISCWORLD

Unlike typical "science of" titles seeking to explain fantastic stories with real-world science, Terry Pratchett and his science advisers tell a story from the magical viewpoint of the flat Discworld. The evolution of this world is observed and explained using fictional terms that simply explain complex ideas. Stephen Briggs brings his usual expertise to his narration, warmly delivering dialogue and narrative. In particular, his mastery of dialect distinguishes characters without overacting. Michael Stevens delivers a more clinical narration, describing various bits of history and science in a slightly didactic manner. The result is hilarious but also uniquely informative, allowing fiction to suggest fact in an organic manner. A.Z.W. Winner of AudioFile Earphones Award © AudioFile 2014, Portland, Maine [Published: JULY 2014]