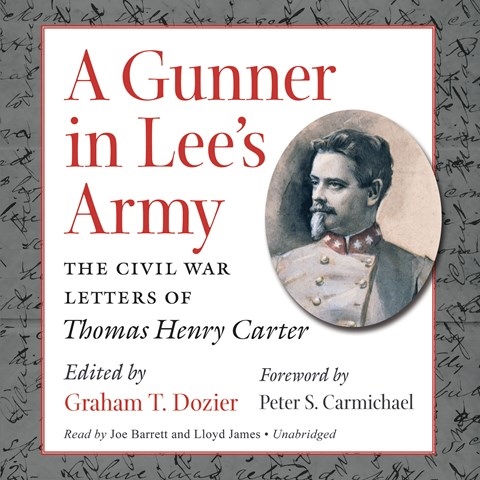 Joe Barrett delivers the commentary, background information, and footnotes, and Lloyd James narrates the letters of Colonel Thomas H. Carter in this firsthand account of life in Confederate service during the Civil War. In 1861, Carter raised an artillery battery for the Confederacy from King William County, where he was from; saw action in nearly every major engagement of the Army of Northern Virginia; and eventually rose to command the artillery for the ANV’s 2nd Corps. His letters, of which almost all are addressed to his wife, describe not just battles but also life in camp, his very plain-spoken opinions of his compatriots and superiors, and life in the South during the war. James transforms himself into Carter—his accent, pacing, and inflection are perfect. Barrett, while not as adept, is quite splendid reading the commentary. M.T.F. Winner of AudioFile Earphones Award © AudioFile 2015, Portland, Maine [Published: JANUARY 2015]