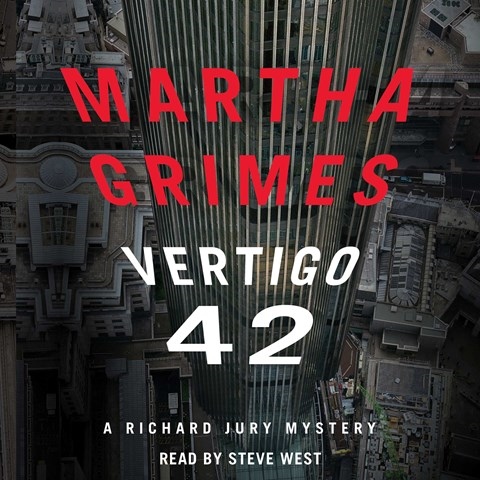 Steve West has enthusiastically narrated most of Martha Grimes's Richard Jury books for British audiences. The title of this one derives from the name of a bar on the 42nd floor of a London office building, where the book begins. Vertigo, both the affliction and the Hitchcock film, are threaded throughout the story. Three females from the past and present have deaths related to falling, and as Jury investigates, links emerge between the present-day murder and the past deaths. Grimes fills her books with colorful regulars to aid Jury's investigation, and West's voices for them are reminiscent of BBC Radio in its heyday. They might verge on caricature for some listeners' tastes, but the approach meshes well with Grimes's nostalgic vision of Englishness. C.A.T. © AudioFile 2014, Portland, Maine [Published: JULY 2014]