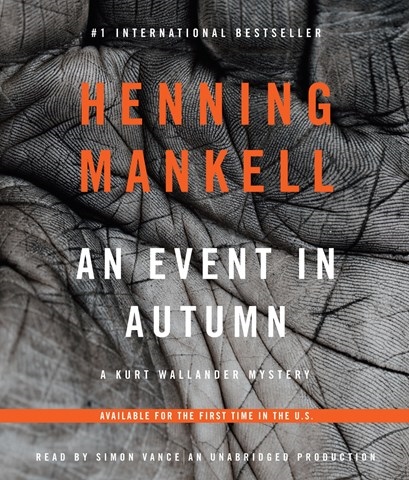 AN EVENT IN AUTUMN A Kurt Wallander Mystery

Simon Vance echoes the weight of Inspector Kurt Wallander’s world-weariness, disappointments, and regrets in his performance of this novella. Wallander is looking to buy a house in the country when he finds a body in the garden and a crime to solve. Vance gives side characters, such as Wallander’s live-in adult daughter, Linda, bright, upbeat voices, delineating their personalities while adding depth to Wallander’s feelings of disconnection and isolation as he explores the long and far-reaching effects of a violent act. The production concludes with an afterword in which Mankell reflects on his writing career. A serious, surprising mystery for fans of the series as well as those new to Mankell’s work. A.F. © AudioFile 2014, Portland, Maine [Published: JULY 2014]