Home»Reviews»THE MISADVENTURES OF THE FAMILY FLETCHER 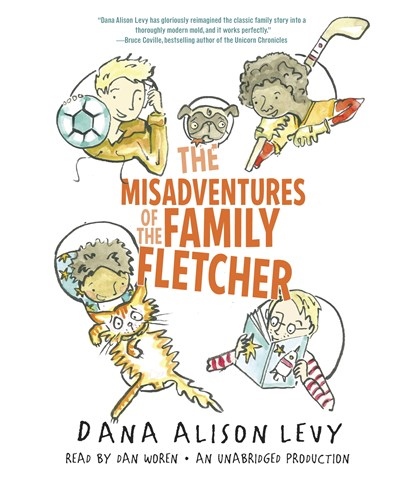 THE MISADVENTURES OF THE FAMILY FLETCHER

Two dads, four boys, a Maine Coon cat, a dog, and an imaginary cheetah comprise the adventurous Fletcher family. Narrator Dan Woren inhabits each of the four Fletcher boys, keeping their characters clear. He’s especially convincing at expressing 5-year-old Frog’s innocence and Sam’s awkwardness around girls. He’s just as accurate in tracking the boys’ many moods, portraying Frog’s frustration at proving that his new friend isn’t imaginary and Jax’s discomfort at approaching their ill-tempered neighbor for a school interview assignment. Woren can switch personas instantly. The two fathers move in and out of the story as Woren portrays the warmth and tenderness they give to their four thriving boys. S.W. Winner of AudioFile Earphones Award © AudioFile 2014, Portland, Maine [Published: AUGUST 2014]