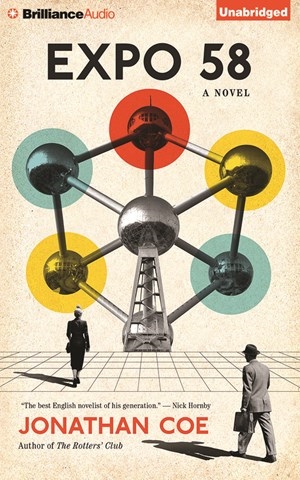 Jonathan Coe takes a historical event, the first post-WWII World's Fair in 1958 in Belgium, and layers an absurdist, quintessentially British madcap spy comedy over the top (literally). Narrator Napoleon Ryan adopts an unassuming middle-class, but quite proper, manner for Thomas Foley, the civil servant who manages the replica pub at the centerpiece of the British pavilion. Ryan masters the accents of the many characters--from the British barmaid to the Russian journalist Chersky (is he a spy?) to American Emily, who demonstrates hoovering at the American display (also a spy?). Ryan just nails the twin rain-coat-wearing Foreign Office agents, Radford and Wayne, with their fast-paced cross-talk to hilarious effect. Sadly, his high-pitched voices for the female characters are annoyingly inauthentic. Nonetheless, EXPO 58 is a delightful farce. A.B. © AudioFile 2014, Portland, Maine [Published: DECEMBER 2014]