Home»Reviews»I'LL GIVE YOU THE SUN 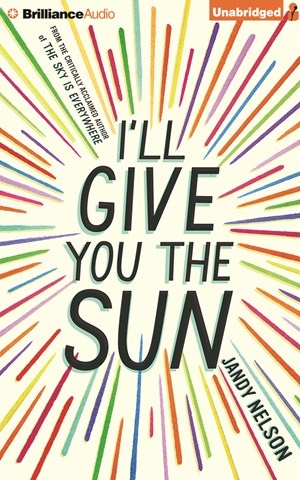 I'LL GIVE YOU THE SUN

Thirteen-year-old Noah believes he shares one heart with his twin sister, Jude, but jealousy and secrets threaten their relationship. Dual narrations by Julia Whelan and Jesse Bernstein distinguish both protagonists, articulate their changing personalities, animate minor characters, and reveal dramatic truths. When Jude resumes the story at age 16, the two barely speak. Jude reveals a history of hurt and betrayals, and a desire for their former closeness. Whelan’s Jude sounds overtly sarcastic, but listeners are privy to her feelings of vulnerability. For example, she believes she can fend off her mother’s vindictive ghost by continually wielding superstitions devised by her quirky grandmother. Bernstein’s young Noah is vulnerable as well, coping with the pain of a turbulent family and his burgeoning homosexuality. Two emotive performances describe the heartbreak of lonely teens who long for a closeness they feel they don’t deserve. S.W. Winner of AudioFile Earphones Award © AudioFile 2014, Portland, Maine [Published: SEPTEMBER 2014]