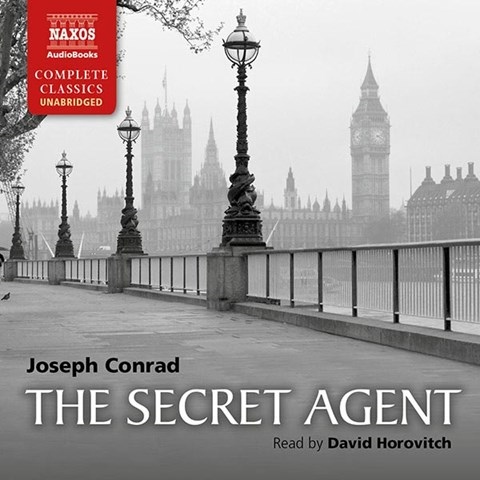 Conrad’s fine character study of a lazy, disaffected secret agent in Victorian London, whose desire for a paycheck from his shadowy masters produces a disaster, is one of the world’s great novels. It’s also slow to start, which is why the excellent David Horovitch is so vital. His attentive pacing highlights Conrad’s beautiful language and minute social observations without contributing longeur, thus keeping the listener interested as the plot develops. His warm, rich tone and English accent are a pleasure to hear. And once the action kicks in, his characterizations of gravel-voiced Eastern-European wanna-be terrorists, plummy government officials, and put-upon London shopkeepers illuminate the points that Conrad is making and add to the drama. This is an excellent and timely reissue of a profound novel. A.C.S. © AudioFile 2015, Portland, Maine [Published: APRIL 2015]