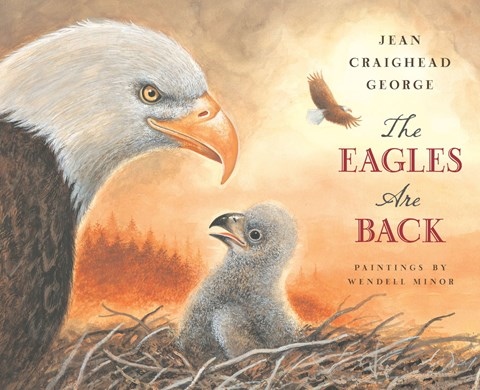 THE EAGLES ARE BACK

The distinctive cry of an eagle greets young listeners, followed by narrator Wendell Minor's voice detailing the decline in the U.S. bald eagle population in the period of extensive use of the pesticide DDT. As eagles and other wildlife were placed on the Endangered Species list, scientists were desperate to save the national bird. This story of a boy and a ranger who encourage an eagle pair to adopt and nurture an eagle egg is heartwarming. Minor's warm, conversational manner provides a "you-are-there" experience as the ranger explains the project's urgency, as the female shakes out her feathers to brood the egg, as the eaglet wobbles along, as the boy catches fish for food. Listeners will be surprised when the identity of the storyteller is revealed. Minor's panoramas and close-up illustrations add depth to the story. A.R. © AudioFile 2015, Portland, Maine [Published: APRIL 2015]