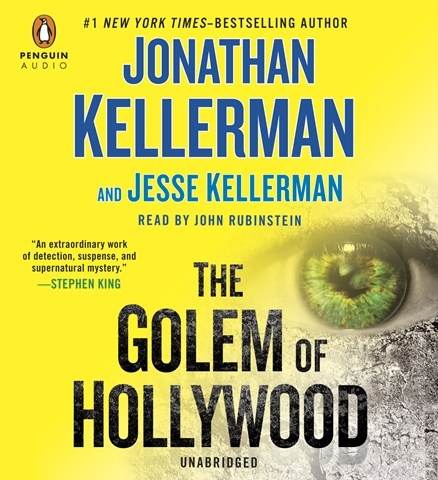 THE GOLEM OF HOLLYWOOD

Here's a winning blend of narrator and material. John Rubinstein is a perfect choice to portray Jacob Lev, a rabbinical school dropout turned alcoholic police detective. Lev, an expert at burning bridges, gets recruited for a special unit that is investigating a severed head found at a crime scene, which ties into a longtime serial killer. With his deliberate pacing, Rubinstein captures the dogged yet confused Lev, and, in equally adept performances, brings alive those around him, including his father (a rabbi) and the many people he meets during his investigation. Rubinstein and the authors create an exciting journey, not just across the globe, but through time as well. D.E.M. © AudioFile 2014, Portland, Maine [Published: DECEMBER 2014]