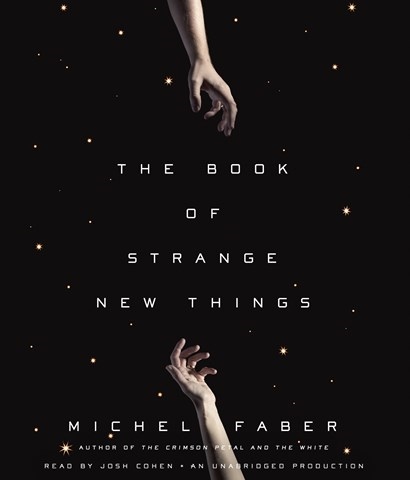 THE BOOK OF STRANGE NEW THINGS

When the USIC Corporation selects Christian minister Peter to witness alien life on a newly discovered planet, he's thrilled--but sorry to leave his wife, Bea. As his mission progresses, Bea writes to him describing catastrophic events on Earth. Narrator Josh Cohen switches effortlessly between Peter's assured British accent, Bea's Yorkshire accent, and various others. Listeners will feel the hairs on the backs of their neck stand up upon hearing the eerie sounds of the aliens' native language as well as their first halting attempts to speak English. However, the greater sense of unease comes from Cohen's charged reading of Peter and Bea's letters, which depict their uncertain marriage and faltering faith. E.M.C. © AudioFile 2014, Portland, Maine [Published: NOVEMBER 2014]