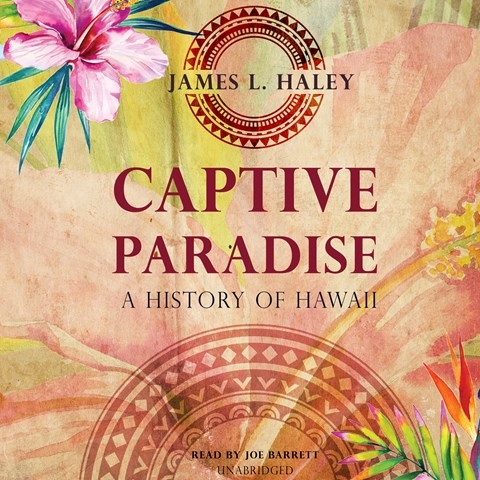 CAPTIVE PARADISE A History of Hawaii

Haley's audiobook history of Hawaii describes the struggle between Hawaiian nobles (Ali'i) and European adventurers, traders, and missionaries. Covering the period that ranges from Captain James Cook's first encounters with the islands through their incorporation into the United States, Haley debunks any notion that pre-European Hawaii was egalitarian or nonviolent. He offers only passing reference to the catastrophe wrought by European disease and to similar dramas taking place with other colonial powers in other parts of Polynesia. Joe Barrett's folksy, gravelly baritone is clear and easy to follow. Both Haley and Barrett treat the Hawaiian language with respect, aiming for accurate pronunciations whenever possible. Barrett does his best even with lengthy discussions of Ali'i genealogy. This is a significant contribution to an often overlooked subject. F.C. © AudioFile 2015, Portland, Maine [Published: APRIL 2015]