Home»Reviews»GABI, A GIRL IN PIECES 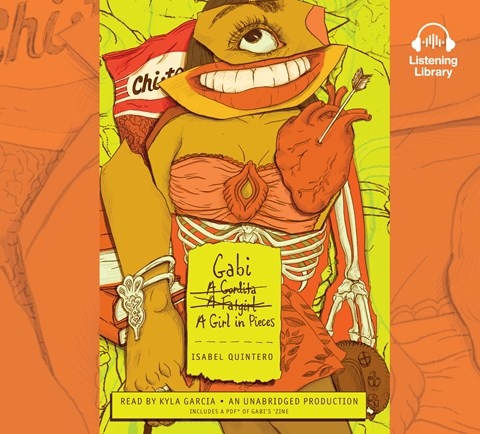 GABI, A GIRL IN PIECES

Narrator Kyla Garcia moves easily between English and Spanish, establishing the cultural confusion of a 17-year-old Mexican-American high school senior. Gabi’s diary entries are a lyrical mix of courage and frustration, confusing sex and honest friendship, shame and pride. Garcia’s wide range of tones authentically expresses the thoughtful teenager’s rapidly shifting feelings, which move from self-deprecation at being overweight to tearfulness as she writes a letter to her meth-addicted father and giddiness when she’s asked out on a date. Gabi is eloquent and messy, smart in school but not wise enough to restrain her emotions amid conflict. Garcia’s versatility and Quintero’s vivid writing unite to show the strength and beauty of a complex young woman. S.W. Winner of AudioFile Earphones Award © AudioFile 2015, Portland, Maine [Published: JANUARY 2015]