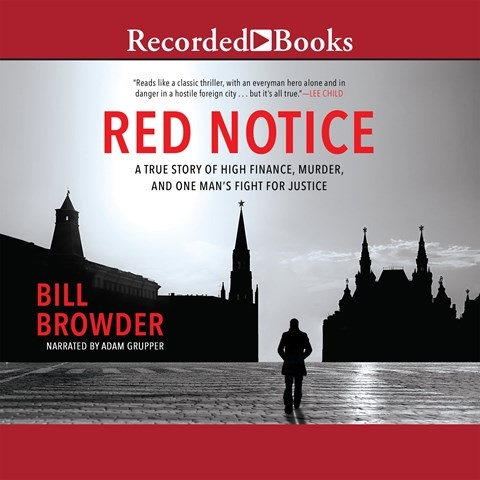 RED NOTICE A True Story of High Finance, Murder and One Man's Fight for Justice

Adam Grupper delivers a spirited and expressive narration of Browder's fascinating memoir, which focuses on his work as a hedge-fund investor in Eastern Europe and Russia. The author begins by describing his family's history as Jewish Communists from Russia. A rebel at heart, Browder became a capitalist. The heart of the story, which some have called a thriller, concerns the murder of Browder's Russian tax attorney by the authorities and Browder's crusade for justice amid the "corruptocracy" that is the new Russia. Grupper is able to give credible accents to a wide range of characters--English, Americans, Poles, and Russians--and still keep his narrative voice consistent, disciplined, and suitably expressive. His reading of transliterated Russian is not up to the same level but won't distract most listeners. M.T.F. © AudioFile 2015, Portland, Maine [Published: DECEMBER 2015]