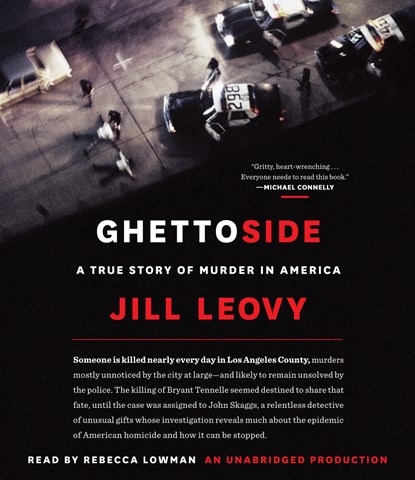 GHETTOSIDE A True Story of Murder in America

There may be no more tragic story in America than the prevalence of black-on-black violence and the public dismissal of it as unimportant. Narrator Rebecca Lowman takes a low-key approach, and it works perfectly; this audiobook is so dramatic and sad that it doesn’t need any amping up. Jill Leovy hangs her exploration of the South Central district of Los Angeles on the death of teenager Bryant Tennelle, the son of a police detective with no gang connections, and the efforts of Detective John Skaggs to solve that murder. Lowman convincingly renders the decency and drive of Skaggs, who is white and who lives in the area, has an unbelievable work ethic, and believes justice is the key to prevention. The litany of death is depressing, but there’s some comfort in learning that there are heroes on the side of angels. A.B. Winner of AudioFile Earphones Award, 2016 Audies Winner © AudioFile 2016, Portland, Maine [Published: MARCH 2016]