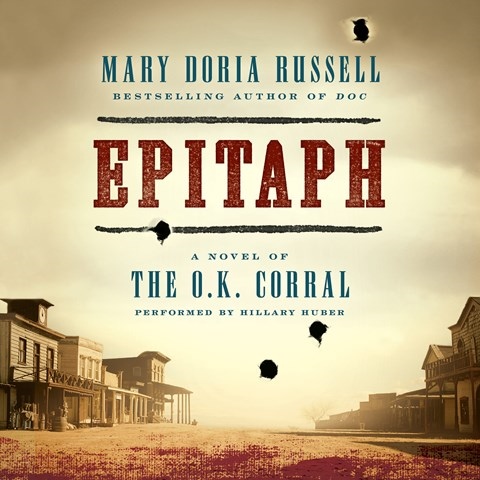 EPITAPH A Novel of the O.K. Corral

A female narrator is a surprisingly suitable choice for this novel about the gunfight at the O.K. Corral. Although it was Wyatt Earp and Doc Holliday who faced the Clantons and McLaurys across that dusty vacant lot in Tombstone, Arizona, it was their women who were most deeply struck by the tragic consequences of those bullets. Hillary Huber provides a stalwart, gutsy portrayal of Kate Haroney, the brothel madam whose tempestuous relationship with Doc Holliday was scandalous even in the Wild West. Huber gleefully portrays the cunning Josephine Marcus, a scrappy former prostitute who became Earp's common-law wife. Almost half a century after the gunfight, Huber adds tenderness and a touch of frenzy as Josephine persists in her version of the epic shoot-out. N.M.C. © AudioFile 2015, Portland, Maine [Published: MARCH 2015]