Audiobooks: BRIDGET JONES’S DIARY; LOUISE, THE ADVENTURES OF A CHICKEN; DEATH ANGEL; THE CHALK GIRL; THE COLLECTED STORIES OF EUDORA WELTY; A RIVER IN THE SKY


Barbara Rosenblat's distinguished career as an audiobook recording artist has earned her legions of fans and laudatory press both here and abroad. She has won eight coveted Audie Awards from the Audio Publishers Association including Best Female Solo Narrator. AUDIOFILE magazine has named her a Voice of the Century and a Golden Voice and has conferred 57 Earphones Awards for superior narrations. Her work is notable for an extraordinary range of dialects and characterizations displayed in countless classics, bestsellers, mysteries, and romances. 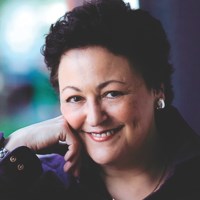