Callie Beaulieu is a freelance SAG-AFTRA / AEA actress with over 30 years experience working in theater, film, television and as an audiobook narrator. She has narrated 175 plus titles for Tantor Media, Recorded Books, Gildan, Findaway Voices, Vibrance Press and HighBridge. A mature voice described as engaging, "listening easy," and warm with "strong emotional connection", Callie specializes in Non-Fiction, Self Help, Cozy Mysteries, and Inspirational Fiction. 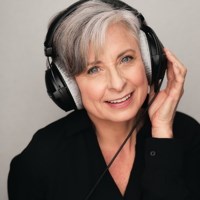