Audiobooks: STORM FRONT; THE LAST ADVENTURE OF CONSTANCE VERITY; HOW WILL I KNOW YOU; WHAT MOTIVATES GETTING THINGS DONE; THE WEIGHT OF FEATHERS; WILD MONTANA SKIES


Cynthia has recorded over 50 titles for most publishers, audiobook production companies and also for The Library of Congress. She is known for her portrayal of strong female characters but has also given great shape to blossoming young adults in YA, as well as life to colorful and wacky characters in Science fiction and in fantasy. She has always been a musical theater singer and recording artists, which lead to her precise diction, clear and mellifluous tone, and especially to the warmth in her sound. She feels strongly that each phrase in a title, has a musicality to it, which she feels so naturally with her musician's ear. She is a native Spanish speaker, having descended from a part Spanish mother, and enjoys narrating in Spanish or with a hispanic accent. Cynthia is a working actor and cabaret and Off- Broadway singer in Manhattan, as well as an earphone award-winning narrator. Her recent non-fiction title was submitted for an Audie. You may find her titles on Amazon and samples on her website. She has a home studio, mastering capabilities, and last but not least, two little girls. 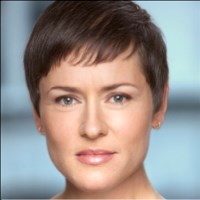