Audiobooks: SAPIENS; UNMASKED; THE DUKE WITH THE DRAGON TATTOO; THE CRYSTAL CAVE; THE SEVEN AGES OF PARIS; FATEMARKED, THE FATEMARKED EPIC, BOOK 1


Derek Perkins, originally from the UK, has narrated over 375 audiobooks in a wide range of fiction and nonfiction genres. His awards include two Society of Voice Arts and Sciences (SOVAs, 2018), an Audie (2016) and multiple AudioFile Earphones awards. He was nominated for an Audie in 2015 and was a double SOVA nominee in 2015 and 2014 for the Best Voice award in two categories. AudioFile magazine named him a Best Voice, Biography & History in 2016, 2015 and 2014 and a Best Voice Romance in 2016. In 2016, he published Audiobook Narration Manual, prompted by conversations with aspiring narrators wanting to understand the best, most effective way of breaking into the audiobook business. 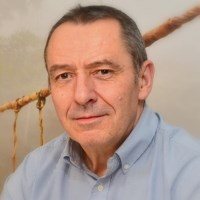