Dion Graham, from HBO’s The Wire, also narrates The First 48 on A&E. An award-winning and critically acclaimed actor and narrator, he has performed on Broadway, Off-Broadway, internationally, in films, and in several hit television series. Working with publishers large and small he's been honored with numerous Audie Awards, the Odyssey Award and Odyssey Honors, many AudioFile Earphone awards, and multiple PW Listen Up Awards. He's been named an AudioFile Golden Voice, Booklist's Voice Of Choice, Publishers Weekly's Narrator Of The Year, and to various other 'Best Of' lists. Known for excellence across genres his performances have been praised as thoughtful and compelling, vivid and full of life.
See full audiography
See editorial profile 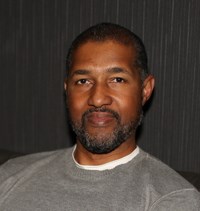