Linda Jones is an award-winning narrator and NYC actor with a penchant for dark edges and curious truths. Weaned on du Maurier and Hitchcock, Kafka and Poe—tales of mystery, adventure and intrigue spawned a decades-long career with writers in new work, development and narration. She has narrated for Penguin Random House, Recorded Books, Audible Studios, Tantor and Dreamscape, as well as a variety of independent authors and publishers. She has a BFA from Ithaca College. She lives in Brooklyn with writer John C. Foster, their dog Coraline, and an apartment filled-to-bursting, floor-to-ceiling, corner-to-absolute-corner with books. 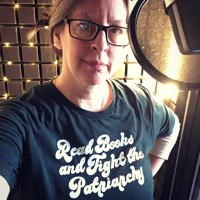