Audiobooks: MODERN MAN IN SEARCH OF A SOUL; TACITUS, The Annals; BEING AND TIME; COLLECTED PAPERS ON ANALYTICAL PSYCHOLOGY; THE OLD MAN IN THE CORNER AND OTHER DETECTIVE STORIES; SUMMA THEOLOGICA, Part I (PRIMA PARS) & Vol. 2


Martyn has been a simultaneous interpreter for more than 30 years. He interpreted personally for Nelson Mandela shortly after his release from prison in South Africa in 1990. He has acted on stage and screen, produced and voiced content for current affairs radio and tutored in media and presentation skills. In the 1980’s, he spent 4 years travelling the world by motorbike, summiting Kilimanjaro, and crossing the South Atlantic under sail. Martyn’s French is native speaker level. He also speaks German and Spanish 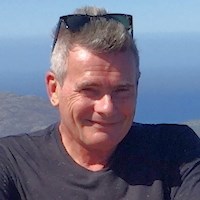