Audiobooks: A THOUSAND STEPS; THE DRIVE-IN (A B-Movie with Blood and Popcorn, Made in Texas); STRANGE BUT TRUE; THE AUCTIONEER; THE KEEPERS (Mace Reid K-9, Book 2); LOSING EARTH (A Recent History)


Matt Godfrey was raised in the Deep South on O’Connor, Welty, and Lee, and spent most of his teenage years in Yoknapatawpha County. But the books took him places, from Los Angeles to Tokyo, Bradbury to Murakami. After nine years as a working film and TV actor, he found his true passion in audiobooks and now is lucky enough to live inside books every day. He is a winner of the Audiofile Earphones Award and a multiple-time nominee for the Society of Voice Arts & Sciences Awards and the Independent Audiobook Awards. He has a fully equipped home studio and works with major publishers, small presses, and indie authors alike. 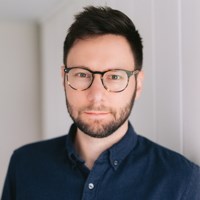