Audiobooks: FOOTSTEPS OF FEDERER (A Fan's Pilgrimage Across 7 Swiss Cantons in 10 Acts); THE YEAR OF PERIL (America in 1942); SWEET TASTE OF LIBERTY (A True Story of Slavery and Restitution in America); HOW DARK THE WORLD BECOMES (Sasha Naradnyo, Book 1); COUNTERPOINT (A Memoir of Bach and Mourning); VAN GOGH (The Life)


Paul’s performances are consistently cited for his authentic storytelling, realistic characters, and commitment to the text. He has performed best-selling audiobooks for Audible Studios, Blackstone Audio, Tantor, Macmillan, Podium, Dreamscape, and Brilliance, as well as many independent authors and publishers. A versatile narrator of over 250 audiobooks, he is an Earphones award-winner, and Audie nominee.
See full audiography 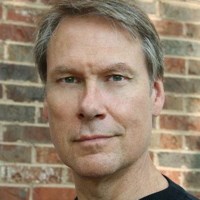