I have 20+ years of experience as an actress and voiceover artist with a BFA from NYU Tisch School of the Arts and RADA, London in addition to a laughably long list of improv, acting and voiceover teachers post-grad. For audiobooks I’ve trained with coaches including Christina Rooney, Elise Arsenault, and Marc Cashman. I’ve appeared in TV shows on NBC, The CW, Nickelodeon, CBS, and Disney+, voiced commercials for everything from Clorox to Ralph Lauren and performed on stage in NY, Chicago, and Los Angeles. Stories with a sense of humor are my sweet spot. My training as a life coach makes personal development a no-brainer, and I love playing rebellious characters in genres like women’s fiction, fantasy and YA. 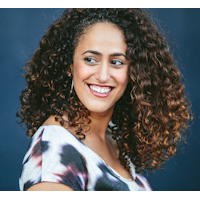