Stephanie Gould is an actress, editor, and improviser whose recent appearances include a recurring role as Carmen Campos on the 6th season of the Netflix hit series Orange is the New Black, The Marvelous Mrs. Maisel opposite Jane Lynch on Amazon, Mr. Robot opposite Rami Malek, and HAPPY! opposite Christopher Meloni on Syfy. Her narration credits include everything from fiction to sci-fi and mystery. 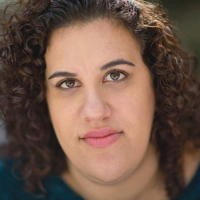