"Listening to audiobooks is a multilevel experience for author David Anthony Durham. It’s not just entertainment for him. It’s part of his creative process. It’s work. It’s even a bit of an education. " 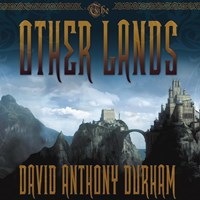 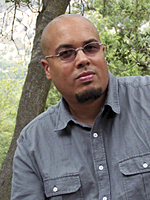 Listening to audiobooks is a multilevel experience for author David Anthony Durham. It’s not just entertainment for him. It’s part of his creative process. It’s work. It’s even a bit of an education. “I listen to audiobooks everywhere, all the time,” Durham says. He finds listening to audiobooks particularly invigorating while taking long walks in the woods near his western Massachusetts home. “I know men aren’t supposed to multitask very well,” he laughs, “but walking in the woods is about thinking about my stories. I do that partly by listening to other people’s stories at the same time. It’s definitely stoking my creativity.”

Durham, whose early work includes historical fiction (GABRIEL’S STORY, WALK THROUGH DARKNESS, and PRIDE OF CARTHAGE) and who has now moved on to epic literary fantasy (the Acacia series, including THE WAR WITH THE MEIN and THE OTHER LANDS), has become aware of the impact audiobooks are having on his own work as publishers’ focus on audio grows with consumer demand. There was a time when seeing his earlier novels published as audiobooks was something of a footnote, but these days, as technology grows with listeners’ enthusiasm and more and more print books are also published on audio, Durham’s outlook has changed. “There are so many people who have written to me, saying good things about a book. A lot of them say they’ve LISTENED to it. I love that, and I think it’s become much more a part of how I look at my future as a writer.”

But Durham’s perspective on audiobooks isn’t limited to his changing readership. He’s discovered that listening to books on his iPod Touch (no longer the clunky Walkman!) has an impact on his line-by-line prose. “Audio is affecting the way I approach words and storytelling,” he says. But these ways are subtle and graceful. They become “yet another of the various filters and layers of revision and things to consider” as Durham polishes his work.

One wonders how many authors listen to their own work on audio. Durham certainly does, but it’s not for the reason one would think. Durham’s current project, the three-volume Acacia series, is an intricately layered, complex, and ambitious epic fantasy. Not surprisingly, the details can be hard to keep track of. “It’s not at all as if I have all of those details in the front of my mind,” Durham confesses with a chuckle. “When I was getting near to finishing THE OTHER LANDS, I wanted make sure I knew what the hell I was talking about.” So, he grabbed his iPod and loaded up Dick Hill’s reading of ACACIA: THE WAR WITH THE MEIN to refresh his memory. “Listening to the reading, I thought, ‘Oh that’s right! I forgot about that—I have to make sure I deal with that by the end of the next book.’”

Listening to his own words read by someone else has a deep effect on Durham. “There’s something special about hearing my words in someone else’s voice,” he says. “It’s a feeling that the text isn’t just mine anymore, that there’s a certain amount of ownership of the text by the world and by other people who are producing it and listening to it and giving voice to it and bringing it alive. And that’s pretty exciting.”

Even though Durham is willing to give up his words and his stories to the world for enjoyment, interpretation, and appreciation, listening to them on audio doesn’t change his relationship with his story or characters. It does, however, influence how he presents his work to others. “On a very basic level, it influences how I hear the book and infuses my reading with an awareness of rhythm and differentiation of voices.” In his own readings, Durham doesn’t go so far as to give his characters accents. He also doesn’t get too theatrical. But with many appearances and readings under his belt and some careful study of audiobook narrators’ techniques (Neil Gaiman among them), Durham does feel that he’s “a better reader these days.”

So was it always like this for Durham? Or is audio a new thing for him? Both, in some ways. “I am a longtime listener, but I’ve grown into it,” he says. And he has no favorite listens. He does, however, recall one standout listening experience, one that had an impact on his future as a novelist. While living in Dunkeld in central Scotland, Durham went for one of his essential walks. “I was really hungover,” he confesses, “and I was trying to take a hell of a walk to see if I couldn’t defeat that.” On this walk, Durham popped the first cassette of Frank Herbert’s DUNE, read by George Guidall, into his old Walkman. “It had been a long time since I’d enjoyed what I was reading, enjoyed being in the hands of a storyteller. That happened for me with DUNE and the reading of DUNE, and it has affected my career ever since.”

As he continues work on the third volume of the Acacia series, Durham plans to take his walks with Cormac McCarthy’s NO COUNTRY FOR OLD MEN for company. Farther down that path in the woods, he might find a prequel to PRIDE OF CARTHAGE (not currently on audio, something Durham hopes to correct). Whichever audiobook is playing while Durham is working out story ideas or narrative problems, one thing is for sure: “I know I’m writing for an audience of readers who experience books as more than just words on a page.”—Allison H. Adams