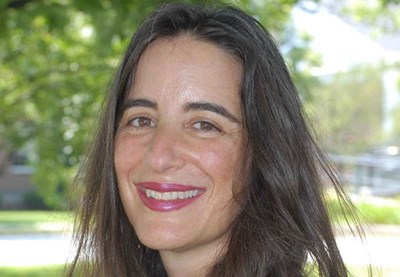 Author Jandy Nelson is a self-described “audiobook fanatic.” She listens at the library, buys the audiobook, and then buys the print book--“so I don’t have to sit in front of my apartment for hours listening.” But sometimes she does that as well.

One of her favorite listening experiences comes when she chooses an audiobook for traveling. Lately Nelson, who’s recently published her second novel, I’LL GIVE YOU THE SUN, is researching her third and driving from her home in San Francisco to spots in northern California. “It’s funny how an audiobook affects your journey,” she says. “Lately, I was listening to Pat Conroy’s PRINCE OF TIDES, and I know that from now on whenever I’m in those same places again, I’ll think of scenes from his book. All audiobooks are like that to me. They become part of the place I’m traveling.”

At the time of our interview, she’d already listened to half of I’LL GIVE YOU THE SUN on audio. “I’m in love with it. Julia [Whelan] played Lennie, the main character in THE SKY IS EVERYWHERE, and I knew we had to get her for Jude [one of the two twin protagonists in Nelson’s second novel]. When I heard her, I was blown away. She’s sublime, the perfect Jude. She completely got Jude’s very complicated character. Julia has a way of making Jude’s façade funny and wonderful, but you can feel the emotion underneath and the contrast of what she’s saying.”

I’LL GIVE YOU THE SUN has two narrators, and so does the audio version. Jesse Bernstein reads the part of Jude’s brother, Noah. Nelson is just as enthusiastic about Bernstein’s performance. “Jesse was an incredible Noah. I think he’d be hard to play because he’s so emotional and so all over the place. But Jesse really got it. I’m thrilled.”

Nelson’s written voice is as remarkable as these actors’, a fact that makes sense as she says she hears her characters in her head. She takes a long time to write her books and allows herself plenty of time to get to know her characters. Knowing that she’d braid time periods and characters in this book, she started by developing Noah and Jude’s individual stories. “When I worked on Noah’s story, I would lock Jude’s file, so I couldn’t go into it. And the same with Noah--because I really wanted their voices to be distinct and different. After a time, their voices were so natural I just felt like I was riding along on their backs.”

Both the characters and the structure of the book are complicated. Nelson says, “The book is a tapestry of a lot of different stories--romantic ones, family ones, mothers and daughters, fathers and sons--but ultimately the whole book really is about the relationship between the twins and what comes between them and how they finally get back to each other.

Thousands of pages of I’LL GIVE YOU THE SUN wound up on the editing floor. She wrote the characters at many different ages because writing scenes when they were younger helped her get to know Jude and Noah. Her book and these characters taught her much “about the artistic process, loss, and love.” For Nelson, one of the great joys of writing fiction is that you get to live two lives at once. “You get your real life and then this other life that you’re equally invested in and living. I’m a big believer in taking time when you’re writing books because so much can happen, so many things can evolve. It takes time for them to grow, for the good stuff to happen.”--Susie Wilde