"Listening to Fox’s performances is unlike the print reader’s experience of the memoirs, and cannot be replicated in another medium. The audio experience is rich with his personal vigor." 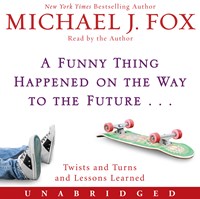 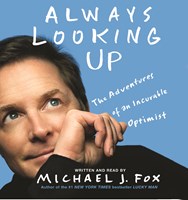 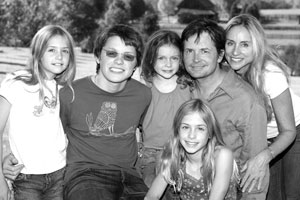 Seven years after his first memoir, LUCKY MAN, Michael J. Fox returns to recount, in a familiar but somewhat changed voice, “the major shifts in his life, which include leaving his acting career, creating the Michael J. Fox Foundation for Parkinson’s Research, advocating for PD research, and coping with the disease itself, which has been tyrannical of recent years. However, PD is also a source of Fox’s optimism—which the listener can clearly hear in his poignant and impassioned delivery.” Thanks to Fox’s reading, ALWAYS LOOKING UP is a unique, and uniquely personal, audio experience. - 2009

“Words that are written for the page are different from words we hear. There’s a real nuance of timing.” Michael J. Fox has experienced this phenomenon in relation to his two memoirs, LUCKY MAN (2002) and ALWAYS LOOKING UP (2009). For both titles Fox got behind the microphone to read abridged versions of the texts and created powerful audiobooks. Listening to Fox’s performances is unlike the print reader’s experience of the memoirs, and cannot be replicated in another medium. The audio experience is rich with his personal vigor, which is not diminished by his Parkinson’s disease.

Timing is just one element of the power of these audiobooks. Fox’s long career as an actor of comedy has given him the chops to excel with the delivery.

His acting awards--Golden Globe, Emmy, Screen Actors Guild--for “Family Ties,” “Spin City,” and Back to the Future--make a long list, not to mention the 2003 Audies Award he got for his first audiobook. The perfectly timed quips and comments come deftly, and naturally.

Even more amazing is the challenge Fox faces in delivering his story at all because of the effects of his condition on his speech and movements. Fox continues to give interviews and to appear in public and has a regimen to coordinate his medication, but it’s an uncertain balancing act. The medication itself causes dyskinesia, which manifests as cluttering of speech, and it’s very difficult to sit still, to sit in one place. Clear speech and sitting completely still are usually requirements when recording.

Fox has experience with many different media--TV, film, political campaigns, charity benefits, books, and audio. With an audiobook, you have your reader’s attention more, he suggests. “It’s harder for the ear to wander than it is for the eye or mind to wander and be distracted by things. The ear is more visceral. You’ve got somebody.” The listening experience has a compelling intimacy and personal message that clearly come through.

Some parts of highly personal memoirs are often more difficult for an author-reader to deliver. Fox found his personal stories on the subject of faith, and the fear of God--especially those of some of his religious experiences as a child--easier to write than recount aloud. Typically, Fox also notes what came easiest: his political experiences of the midterm elections of 2006. [Fox used his public advocacy for the support of embryonic stem cell research to support candidates with similar views.] This part of Looking Up seemed to “gush out,” he said. “ It was easy to read, the recording session sped by. It’s your own experience--you’ve written it--you’re reading your own manifesto.”

Fox concluded our interview with the idea that his “optimism, hope, and faith are a somewhat hard-to-define triumvirate.” A triple crown.--Robin F. Whitten