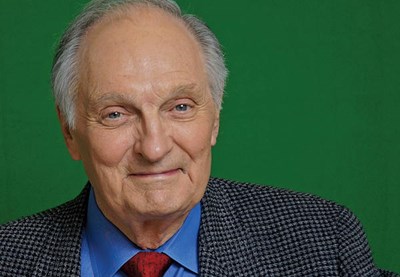 "I believe a book, when read by its author, has an extra communication and understanding to convey to the listener." 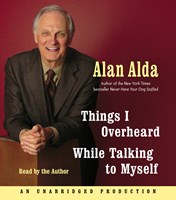 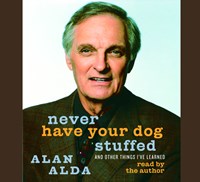 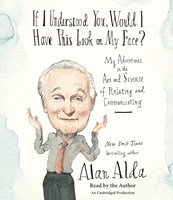 Alan Alda’s performances have made audiences sit up and take notice for many years. Whether he’s portraying Hawkeye Pierce in the iconic “M*A*S*H” TV series or the guy-you’d-love-to-hate in a Woody Allen movie or narrating one of his own audiobooks, Alda commands our attention, our admiration, and our respect. He was thrilled to be nominated for a Spoken Word Grammy Award in 2008 for narrating his audiobook THINGS I OVERHEARD WHILE TALKING TO MYSELF. That was a year of some pretty stiff competition. Among the other nominees were Maya Angelou, Jimmy Carter, Bill Clinton, and Barack Obama. Alda tells us, “I loved Obama’s audiobook THE AUDACITY OF HOPE the year he got the Grammy for it. And you can see that I really loved it because we were both nominated for the Grammy, and he won!”

Having narrated several audiobooks, Alda says a typical day in the recording booth can be harrowing. “You get about six hours of reading out loud. Your voice starts to go, and it doesn’t match the earlier part, and it doesn’t match the beginning of the next part, which is going to be the next day, when your voice is strong again. The effort is to try to do it in a very short period of time. You pretty much have one chance at it. That’s what’s fun about it.” About being confined to a small booth Alda says, “I like to wave my arms a lot when recording. The sound engineers keep saying, ‘Tomorrow come in with a shirt that doesn’t make noise when you wave your arms.’”

While most of us know Alda the actor, director, and writer, another aspect of his life has focused on science and the science of communicating. From 1993 to 2005, Alda hosted the TV show “Scientific American Frontiers,” interviewing scientists and doctors. It wasn’t long before he recognized that the scientists he interviewed weren’t really communicating. “A great deal of what I learned as an actor about relating is what gave me a clue that teaching scientists improvisation would help them to relate better. It turned out to be true, and it surprised all of us the first time we tried it. It was intuition on my part, and we didn’t know if it would work. It was a startling afternoon. They got much better about talking about the science after only a few hours of basic improv exercises.”

The results led to the Alan Alda Center for Communicating Science at Stony Brook University, a program designed to train scientists to communicate. The method they chose involved using Viola Spolin’s classic 1963 text, IMPROVISATION FOR THE THEATER. For about six months they held workshops with Second City alum and Story Theatre founder Paul Sills, and after many workshops Alda was immensely gratified by the results. From that experience, Alda was inspired to write If I UNDERSTOOD YOU, WOULD I HAVE THIS LOOK ON MY FACE? “Among the more than 8,000 scientists and doctors we had trained over the years, many of them told me that this training is for everybody, not just for scientists and doctors.” One scientist said that the training had saved his marriage. Last year they did 150 workshops at universities, including the Australian National University. “I just came back from Dundee, Scotland, where we’re training forensic scientists. While we were there, we worked with scientists in Ireland, and we’re going to Oslo, so we’re all over the place.”

While there’s nothing theatrical in Alda’s immediate future, he is deeply engrossed in his newest project, a company that will offer this communication training to corporations. ACT, Alda Communication Training, is a for-profit company, but the profits go to the Center at Stony Brook. “I’m really excited. Our first project is a workshop for women in business. It’s amazing to see that with all the advances we’ve made over the last 40 years, it’s still common for women in business to be interrupted at a meeting, to have their ideas stolen, to go through harassment.”

Does reading his own books on audio fly in the face of what Alda is trying to teach about communicating? “Ironically, I implore scientists not to read to an audience because all it usually amounts to is processing words. It’s not communicating. People have told me that they like to hear me read the book because they get my own animation, my own emphasis, my own understanding of what a page is about. What I consciously try to do is not simply process words, but to speak to a real person at the other end of the microphone.”--S.J. Henschel

[FEB/MAR 2006] -- "I'm used to talking for a living, so recording the audiobook of my own writing was not a chore," says award-winning actor, TV and film writer, and now book author Alan Alda. The recently released audiobook of his humorous memoir, NEVER HAVE YOUR DOG STUFFED AND OTHER THINGS I'VE LEARNED , demonstrates in superlative fashion that Alda is a curious and talented guy. So talented, in fact, that in the past year, he had the distinction of being nominated for an Oscar, a Tony, and an Emmy--and making the New York Times bestseller list--all in the same year.

From having his deceased dog stuffed with a hideous expression on its face to recalling his intestines becoming strangulated while on location in Chile for his PBS show "Scientific American Frontiers" and facing real death in real time, the stories recalled in his memoirs are a diverse lot and are more than colorful show business anecdotes.

Alan Alda was raised in the vibrant world of burlesque, Broadway, and the movies, the son of singer Robert Alda and a loving but mentally ill mother, Joan. He admits his journey to adulthood began in the dressing rooms of the strippers and ribald comics who became his extended family while on the road with his mom and dad.

He grew up listening to the great radio programs of the 1940s and '50s and watching the live performances of his father and his cronies, so it's no surprise that Alda has an affection for audiobooks that traces its origins to the world of radio. "What interests me most about audiobooks is a very simple thing. Personally, I understand and remember more through my ears than by reading. I believe a book, when read by its author, has an extra communication and understanding to convey to the listener," he says. "I felt that, since it was my life and my thoughts, I [and not another narrator] would be most connected to the writing."

Alda says the most intense part of the recording process was when he thought of his mother and remembered going through her belongings after her death. It turned out that what she treasured most, and what she kept in a locked box, was a picture of her only child, Alan. "In that moment," recalls Alda, "reading my own words was more than just about the writing. I was really feeling something. It was an emotional experience, but not in a bad way."

While his audiobook is recorded in an abridged version, he admits that not much was lost. "It would have taken too many discs for the whole book to be recorded. I believe curiosity will lead the listener to read the entire book. The stuff we had to leave out is better read than listened to."

As an award-winning TV and film writer and now author, does Alda have any advice to give to the young writer of today? Without hesitation, he relates that "Hemingway said you learn best by writing. How to get better as a writer is to write. Constantly challenge yourself."

Alan Alda continues to challenge himself as he combines his television and film acting, his writing, his adored family, and his curiosity. He appears to be winning that challenge.--Martie Ramm Engle