Home»Reviews»NEVER HAVE YOUR DOG STUFFED 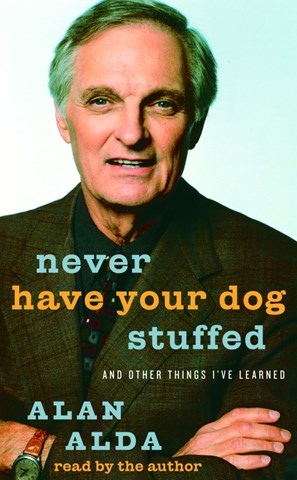 NEVER HAVE YOUR DOG STUFFED

"My mother didn't try to stab my father until I was 6," begins Alan Alda in this highly entertaining memoir of his life. Thus launches the funny and touching story of young Alphonso D'Abruzzo, son of the famous star of stage, screen, and burlesque, Robert Alda, and equally the son of his mentally ill mother, Joan. It would be difficult to imagine any other actor reading these words. Alan Alda does such a masterful job of being Alan Alda that each adventure becomes more potent with the enthusiastic retelling by the one person who was actually there. Hearing his own tales of strippers, comics, prisoners, tutors, near-death experiences, and his dead dog stuffed with a hideous expression on its face is completely enjoyable. Since Alda is an actor and a writer, his love for his own words and their essential meaning rings true. His vocal characterizations do not vary much from the familiar tones listeners have come to appreciate, and that is their enduring strength. M.R.E. © AudioFile 2006, Portland, Maine [Published: FEB/ MAR 06]